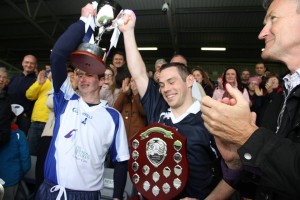 On the 8th of August two GAA legends will take to the pitch in Parnell Park to battle it out in the name of charity at the Professor Hollywood Memorial Cup. At this annual event Anthony Daly will be managing the St. James’s team and Charlie Redmond will manage the St. Luke’s team. Their teams will be made up of players who have all received treatment for cancer and who want to show others that there is Life After Cancer.

The Professor Hollywood Memorial Cup was set up in 2014 to help raise awareness that there can be Life After Cancer and that people can recover from this disease. It also raises funds for the cancer units in St. James’s and St. Luke’s hospitals. This is the second year that the two teams have battled it out for the Professor Hollywood Memorial Cup. In May 2014 Brian Cody and Mick O’Dwyer managed the teams in O’Moore Park and it raised a total of €44,300 for the cancer units.

There will be players from all over the county and a number of well-known faces will be playing in Parnell Park on the 8th of August. Alan Nestor (Meath), Noel McGrath (Tipperary), Joe Deane (Cork), John McGrath (Wicklow), Daragh McEvoy (Laois), Derek Shevlin (Louth) and many others. All of these players have received treatment for cancer.

Mícheál Ó Muircheartaigh will be returning this year to commentate on the game. Mícheál has stated that “Every player on the field, they are already winners. They have many honours as sportsmen but their greatest honour is that they have battled courageously against the disease of cancer.”

John McGrath (Wicklow and St. James’s) spoke of the event “It is such an honour to play with these guys. There is a shared understanding between the players about what we have been through and what it takes to be on that pitch playing that match. I was diagnosed in February 2011 with Leukaemia and I am back to full health again. Staying positive is so important and that is why I wanted to take part in this event to help spread the positive message that you can get your fitness and life back after cancer. “